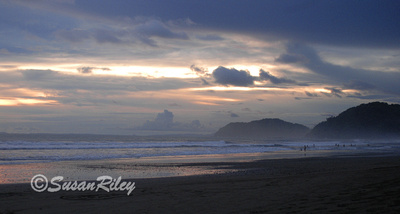 I was reflecting this evening with great clarity on the moments leading up to this photograph. Our bus was loaded with members of the mission team from Texas. We pulled up just as the fading light still revealed a handful of surfers. We had spent a week with a church community in a small town, hauling concrete blocks and cement, much like all the trips such as this I had been on. Although my days of getting in a line to be part of a block party were over (this is similar to a bucket brigade), I found plenty to do. Amazingly, the sun came up at 5:30 in Costa Rica at this time of year....was it July? August?  and that spelled the end of my slumber as I quietly gathered my camera equipment and tiptoed past the bodies lost in sleep...out to greet the day. Every day.

On some mission trips, you are surrounded by children, curious about your clothing, your language, your hair. Sometimes you work in heat you could never imagine at 8 in the morning. Often, there is a team member who annoys the hell out of you, countered by a person you discover to be a most excellent friend. My experience was that you lose yourself in the magic of the new culture, whoever you may be in your real world. I usually liked myself better on these trips than at any other time in my life.

But back to the beach photograph. These excursions to help others usually end in a weekend of relaxation in some beautiful place where the worries of the world you just left behind can be put into some perspective before returning home. My first such trip was to Luperon, Dominican Republic. That is for another story but suffice it to say it was with very mixed feelings that we left our new friends and their poor circumstances to go to a resort to unwind. A buffer of sorts.

So, the bus with the team was just pulling into the town of Quepos, I believe and I remembered from a previous trip to this area that the beach was very near. My heart began racing since I knew that if we hurried we could catch a little of the sunset on the beach. The team leader did not want to make the stop as we were all tired but I pressed the issue and we turned up a tiny street. In two blocks we were on the sand!! I raced out and began snapping away. My memory of this is twofold. It is always interesting to me how differently people can respond to the same stimuli. One person will immediately run to the water's edge and begin splashing their bare feet in the cool ocean while another will hang back, almost disinterested. I have little patience for the last sort. The small child that dwells within me comes forth full throttle at such times and it is in these gleeful, joyous moments that I am grateful a camera ever found its way into my hands all those many years ago.

My other memory is the quietness of the ocean itself. The broad expanse of sand, the flatness allowing the waves to flow far onto the beach before retreating, the peaceful quality of the sky. This was not a blazing sunset of startling hues. Maybe we were a little too late for that. How could it even matter. On closer examination all these years later, I see the people in the surf with their boards, seeking their last pleasure before darkness makes it impossible. I wonder about their lives. Are they locals? I like to think they are.

We got back on the bus at last, heading to our hotel. Quite coincidentally, it was the same one I had visited with my cousin, Lisa some 10 years earlier. Upon returning to the States, I found photos from that trip and sent them to the manager, noting how much the trees had grown. Ten years brought a lot of changes to me as well and it was on this trip that I decided it might be best if I did not sleep on the floor of a church or school ever again. But the hammock on the balcony in Manuel Antonio, the cold drink, the twinkling stars all shared in my recovery at this journey's end. And a beautiful photograph to see time and again bring it all back to me.